In a new photo circulating on Social Media, some executives of the National Democratic Congress, NDC are seen enjoying some goat meat light soup.

Per reports we’ve gathered, they decided to munch on the goat meat after successfully auditing the over 38,000 pink sheets from the various polling stations.

We’ve observed that some Pro NDC Social media accounts have shared the NDC version of the results after auditing their pink sheets, which puts the former President John Mahama ahead of the election.

The NDC and its flagbearer John Mahama have rejected the results of the 2020 Presidential election results as declared by the electoral commission which announced Nana Akufo Addo as President-elect.

Well, we are yet to know the next steps the party intends to take in resolving the issue but there have been a couple of protests on some streets since the results were announced last week. 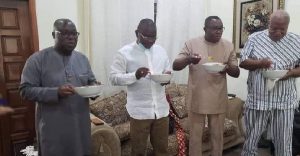