The call on the citizenry to strictly adhere to preventive protocols as the country battles the Coronavirus pandemic appears to have fallen on deaf ears to the extent that even frontline health workers are becoming culprits.

In his 17th address to the nation on measures the government has taken to redeem the country from the quagmire, President Nana Addo Dankwa Akufo-Addo extended the mandatory wearing of face masks by three months.

“So until 14th December 2020, the wearing on masks remain mandatory,” he announced. “It is the new norm of our existence until the virus disappears.”

Like previous tours, he was received by a mammoth crowd, including health professionals.

The multitude, paying no heed to social distancing etiquette, thronged the roadside to catch a glimpse of the president’s tour amid cheers. Clad in their uniforms, the nurses, mainly ladies, waved at the convoy while others seemingly clung to them.

As captured by the cameras of the presidency and shared on the president’s social media pages, some of the jubilant nurses had no face masks. Although the guidelines call for wearing a face mask that covers both the nose and the mouth, with the mask secured under the chin, others who had masks had worn them wrongly as they pulled the facial coverings down – exposing the nose and/or the mouth. 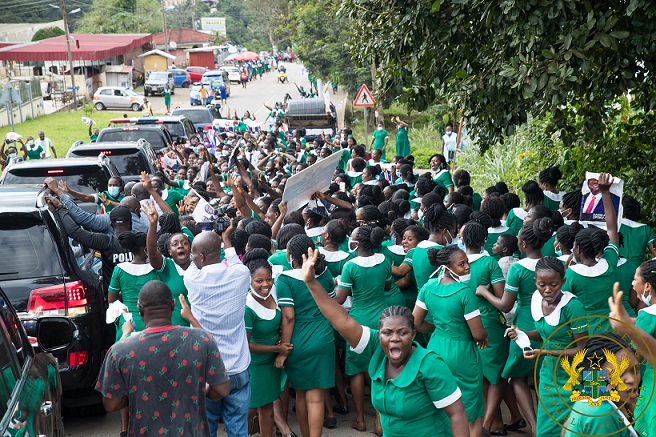 It is not the first time a crowd has flouted the COVID-19 protocols in the quest to be part of a political gathering. The New Patriotic Party (NPP) Aseda Election 2020 held in Ashanti regional capital, Kumasi, last week and the launch of the National Democratic Congress (NDC) parliamentary candidate for Dome-Kwabenya’s campaign have had the same narrative.

These developments have caused a section of the public to wonder if the fight against Coronavirus will be won before long.

It will be recalled that the president in his address underscored the need to not disregard the protocols. Although he expressed delight in the encouraging statistics of the country as regards the pandemic, he stressed that zero active cases must be the ultimate aim.

“Yes, our death rate continues to be low, and our hospitals have, mercifully, not been overwhelmed, as there are, presently, only twenty (20) severe and critical cases. Indeed, there are a lot of empty beds in our treatment centres, and the isolation centres have virtually no patients under care.

“But truth be told: we cannot afford, at this critical moment, to throw caution to the wind, and destroy the incredible amount of work undertaken by Government, health officials, heroic frontline health workers, and members of the security agencies, in bringing us this far,” he said.